We have assembled a comparison chart to help members and visitors differentiate between the parties in 2016. It contrasts the Patriot Party® with the Democratic Party and Republican Party.

The other political parties are not included in the graphic because they are not relevant in the coming elections. Some are narrowly focused (like the “Green Party” and “Reform Party”). Others are based on a flawed ideology (like the “Communist Party” and the “Libertarian Party”).

To illustrate, the slogan “Liberty through limited government” equates to the ideology “limited government is best.” Minimizing government involvement works for every country regarding domestic issues (social and financial policy). However, it fails when applied to foreign matters, especially for America.

According to science, there will always be one entity in the world that the member nations regard (and revere) as dominant. If America abdicates its position of dominance, Russia, China or the United Nations will fill the void. Should that day come, the new dominant force will strip America of its remaining wealth.

To avoid this most unfortunate future, America must embrace its leadership position with pride and confidence. Unless we want to become a third-world nation, our military must remain awesome and we must maintain a strong world presence as the keeper of peace. In summary, science trumps ideology. 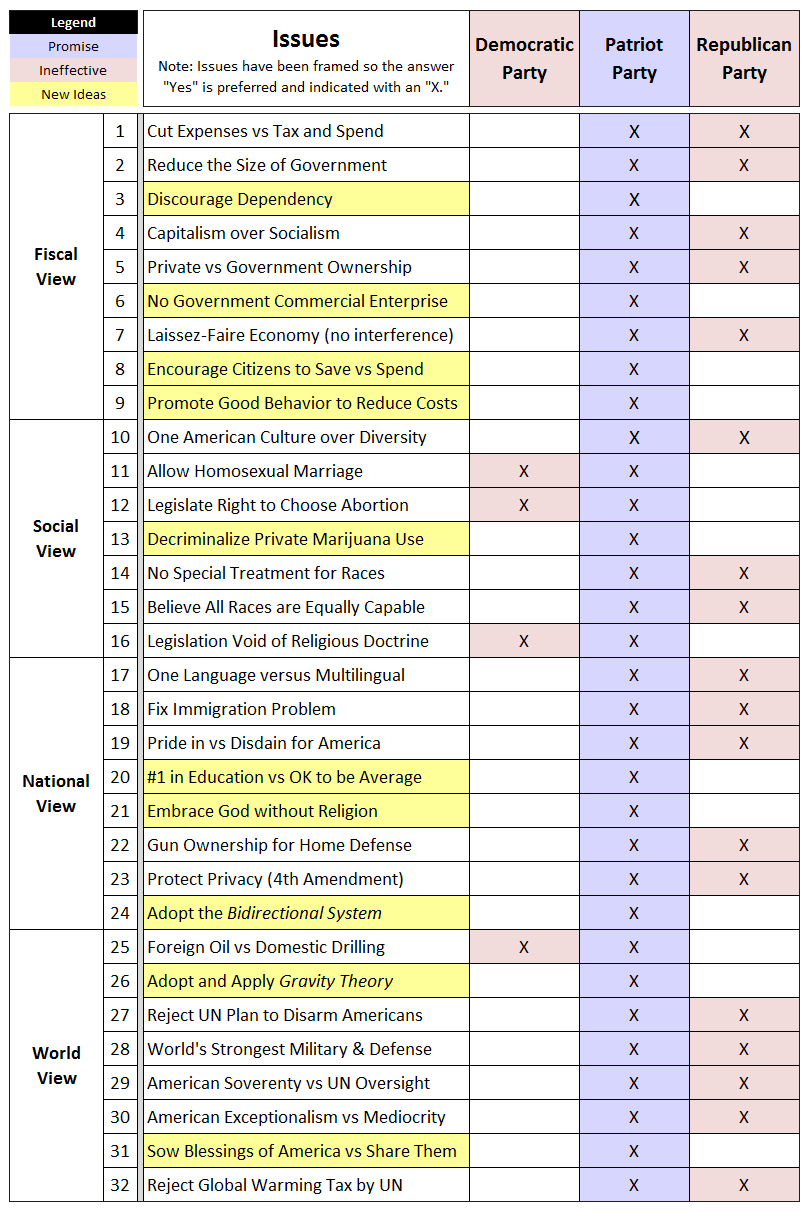 The parties not included in the graphic above are summarized in the chart below. They are arranged in alphabetic order.

Note: The definitions of “Sister Party,” “ Splinter Party,” “Third Party” and “Major Party” appear in the section “Strategies” located on the horizontal menu.


If you don't get involved, you are the problem!

The ramifications of understanding human nature are many. The Patriot Party® is an emerging political party that endorses the application of Gravity Theory and the Bidirectional System as the way to resolve America's social, financial and political problems. Patriot Party Radio broadcasts the Patriot Party® message. Spring-Gravity Theory® is a marketing group that applies the teachings of Humanology® in crafting marketing plans and advertising campaigns for the largest companies and nation-states worldwide. Spring-Gravity Theory® is the result of a breakthrough in understanding human nature. That breakthrough is featured on the Humanology® website. More and more organizations are adopting the knowledge offered by Humanology®. Foundation to Empower Marriage is a non-profit organization dedicated to educate high school seniors on how emotions work and how to use that knowledge to form and maintain successful long term personal relationships including marriage. It's Not About Love is a musical written for high school and college students. It reveals the secret to success in romance and fulfillment in marriage. It's message is based on the knowledge and discoveries of Humanology®. School Is Cool is a not-for-profit corporation that works with the major sports associations in elevating the value of education in the minds of our children. Fittest Form® is a program that helps people achieve their best physical and mental state. Idea Songs is a group of songwriters that applies Humanology® in crafting songs, with an eye on making the most impact and maximizing audience appeal. Professional Songwriter Group is an association of lyricists and composers that study human nature and incorporate that knowledge into their musical works, making their products more impactful on the listening public. Back On Top Music is a publisher of music that works only with authors who understand and incorporate what we now know about human nature. Magyar Music is a music act that incorporates Humanology® when crafting its songs. The author of Humanology®, Don Magyar, can be contacted directly by going to his website. His books are individually titled and can stand alone, yet they are part of the Humanology® series, published by Permanent Publications.